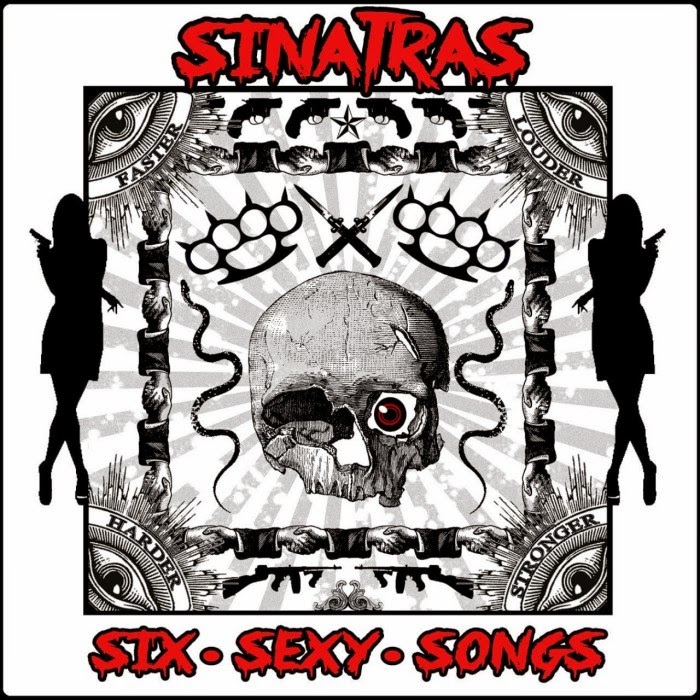 Everyone say hello to the Sinatras. We've got F.L.A. Sinatra on lead vox, Lele &; Minkio Sinatra on guitars,
Lispio Sinatra on bass and Jenny Sinatra on drums. Just like the Ramones before them these five use pseudonyms and the band's self-released EP is pretty self-explanatory. Or at least it is if  you are the type that equates beauty with nuts out brutality! And that's pretty much what we're talking about when it comes this Italian band and "Six-Sexy-Songs". They've self-dubbed their musical style "death'n'roll", but, unlike, say Entombed (just one of the "recommended if you like" bands mentioned along with Pantera, Hatebreed and my personal fave of the bunch, Carcass!) these five bandmates don't necessarily walk the "Left Hand Path".   Nah, these Sinatras roll out the barrels of fun via a hack and slash hodgepodge of death, hardcore, thrash, groove metal and hard rock where the phrase "Kick Out The Jams Motherf**ker!" takes on new meaning!  Custom-built for the rough and tumble crowd, "Six-Sexy-Songs" is a nice "How do you do?" from a band that I hope to hear more from soon!