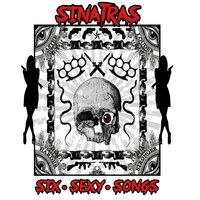 
Italian born SINATRAS were conceived in 2015 as a Classic Metal act, interpreted as a “Death’n’Roll” band. Each member of SINATRAS has experience in multiple Metal disciplines including Hard Rock’n’Roll, Progressive Metal, and Death Metal. The list of inspirations behind SINATRAS includes bands like CARCASS, ENTOMBED, PANTERA, and HATEBREED. SINATRAS released their first demo “Six Sexy Songs” in 2015 and are already working to produce a full-length album. This demo comes in with six tracks, obviously, at a listening time of about 27 minutes.

“Contamination” starts the demo with a soft echo-esque intro that slams your face into a hard and fast thrust of sounds good, good sound. The drums are highlighted exquisitely in this track by both the guitars and the bass. That bass line is very sexy. Completing the songs glory is the barking vocals. This is an excellent track to start the album out, leaving nothing to the listener’s imagination at the end of the track.

Track two “Franck Is Back” has an amazing melody. I felt drawn to the track as soon as it hit, as opposed to the opening where I was underwhelmed. The course and melody of the track along with the solos hold all the interest of the track. There is so much greatness in those sections of the track that the rest lacked luster. “Sunshine” starts off with an interesting guitar intro that instantly pulled me in. I’m a big fan of old school guitar play, and these guys have it nailed. The guitars are brutal and extreme and written with art in every chord.

Each track shows the love these guys have for a genre of music that has so many classifications that sometimes it gets to be too much classifying bands. This is Metal. This is the heart of Metal. This is classic. The vocals are interesting because they can reach a very low growl and it’s unnoticeable, but the cleaner vocals are thick with accent, which creates a uniqueness of its own. The guitars are intricate and bellow furiously, the bass is brilliantly handled, and the drums are fast and on point. There is a definite

Progressive push in this demo that creates something a little different than what we usually get with a Metal such as this. “Six Sexy Songs” doesn’t disappoint.